As a young artist living in a world where the internet dominates nearly every market, social media has been an influencing factor in the progression of my art. Much like everyone who chooses to share their art online, I had to face fears of rejection before beginning to post. However, I soon became obsessed with the connections being made and the relationships being built- both in and outside of the hobby. I used this to further motivate myself to work harder to produce work which expresses the timeless and often universal challenges young people are forced to face.

One issue which teenagers face is time allocation in the sense that there’s seemingly not enough time in the day to evenly distribute all aspects of life; things have to suffer for others to prevail. Producing art everyday has pushed me to maintain a creative aspect on life and has allowed me to develop complex ideas which truly allow me to express myself. The confidence I’ve acquired in my own ideas has encouraged me to take risks and dedicate extended amounts of time to exploring art; with a full sense of enjoyment in return. I have taken my first few steps in this direction, there’s no going back now! 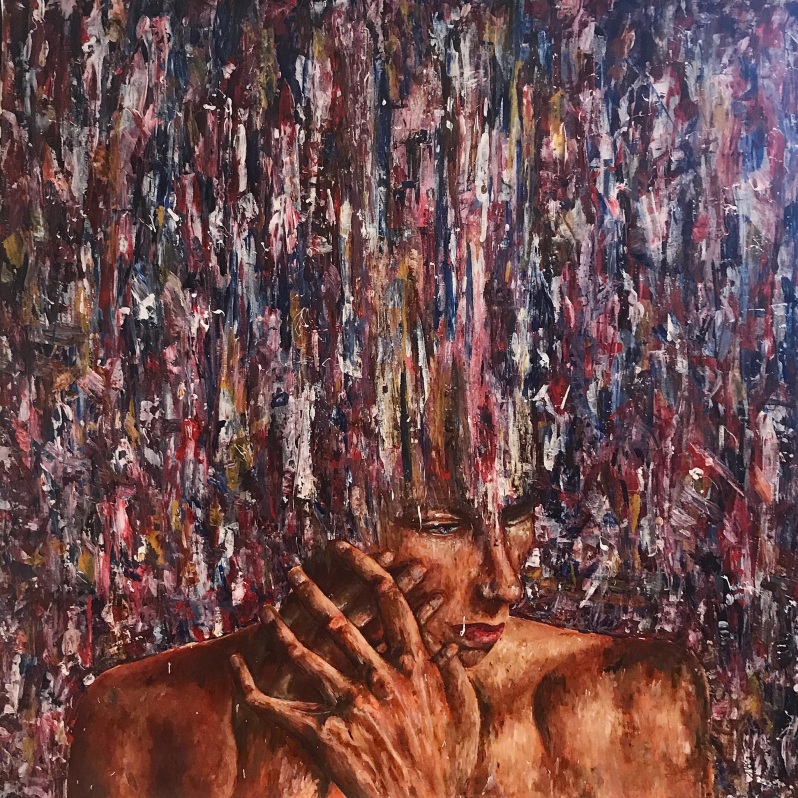 My development into becoming an artist came as a result of many unpredictable paths. I’m originally from Cleveland, OH. Art played a very early role in my life while I was growing up. I began drawing at the age of 5 or 6. I always felt isolated from my family and often gravitated towards being alone in my room where I could immerse myself into my own world of imagination. Drawing was very much a part of that escape. Looking back at my behavior as a very young child, a part of me believes that drawing was probably a way for me to comfort myself from the fact that I was unable to relate to the rest of my family. So it became a very normal everyday routine. It was a world that I always enjoyed diving into where I could exist without restriction or inhibition.

My teenage years consisted of a lot of self-destructive behavior where I began doing drugs and drinking alcohol on a regular basis. I did not draw during those years and I had no concept of dreams, goals, or ambitions. I was gradually declining into being just an empty destructive individual. Around the time I was about 14 years old, and just before I was set to begin high school, we suddenly had to relocate to South Carolina for my dad’s job. Subsequent high school years of hating everyone around me and feeling uncomfortable in every possible situation soon became my everyday life. Becoming acquainted with the unfamiliar territory of southern culture was extremely difficult and I became more isolated and introverted than I already was to begin with.

Throughout my late teenage years, I eventually began working strictly with music and sound. I began making music in various experimental/electronic/rock projects. Most of my 20s were primarily dedicated to developing music projects and very little visual art was created during that time.

By the time I was 27, I became a paramedic after several years of working low-paying odd jobs. During that time I gradually began to work on incorporating visual art back into my life and routinely began to sketch random things. I never considered myself an artist and never thought of the possibility of doing that for a living. Around 2008/09 I started painting for the first time after a friend had urged me to do it when she saw some of my drawings. Over the course of the next few years, my obsession with art began to increase and I started experimenting with various mediums. I started to suddenly develop the need and desire to continually get better at what I was doing. Naturally, the more time that I spent working on art, the better it started to look.

Things continued to grow and develop slowly and naturally from 2010 to 2015. I began showing in small group shows locally and I gradually continued to build up a work ethic towards making art, to the point where a momentum began to take shape…then you suddenly find yourself taking one natural step after the other, like walking. Then it feels natural…Then it becomes a more serious part of your everyday life. Then my life focus began to shift. I eventually convinced myself that living as an artist and working on art on a more serious level started to seem like an actual possibility, instead of submitting to the conventional thoughts and opinions of society who continually try to convince you that being an artist is an unrealistic dream or fairy tale.

I eventually got a studio space separate from my apartment in 2015 and began to develop a larger body of work. I had my first solo show in Feb. 2016. In Sept of 2016, I left my job as a paramedic and found gallery representation with Last Rites Gallery in NYC, where I did a two person show with Eric Lacombe in March of 2017.

You have to trust yourself and maintain integrity, but that comes with time. And you have to bust your ass all the time in order to get what you want. I was no longer interested in anything else. Art became my life and my absolute top priority over everything…and now it’s my life, no matter what. 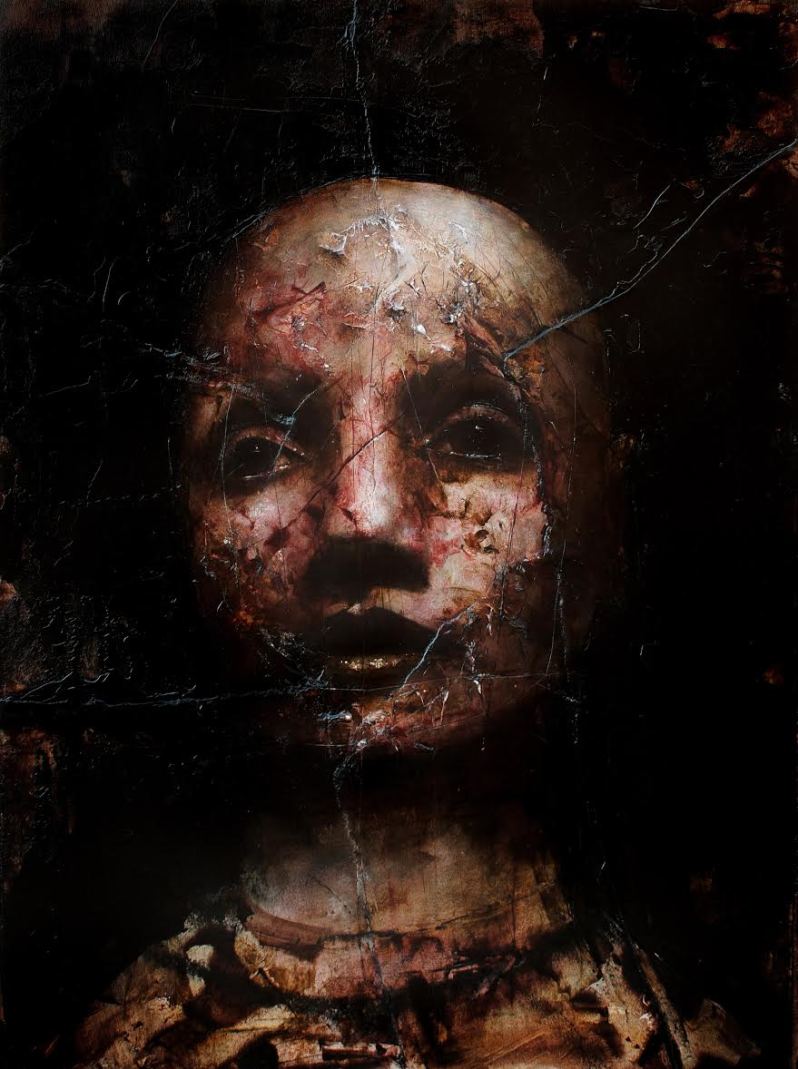 My name is Jessica and I’m a freelance photographer from Australia, currently based in New York City. I work in the social media department for GAP, but tend to travel often for freelance work.

For me, photography is a transcendent way to capture the beauty in ‘in between’ moments. Those are the moments that make up life, and the things that are the most special to me. Very few days glamorous or extravagant, but if you wait for the ones that are, you’ll begin to lose sight of how precious today is. Very few of my shoots are overly planned. I capture images of beautiful things, people, and places I find and try (not always successfully) to be as transparent and authentic as possible. Lately I feel like I’m reading more and more pieces from professional photographers about photography being undervalued in the instagram age. As making images becomes more accessible, the art form and industry is becoming more saturated with content. A lot of pros are angry about this, that anyone can deem themselves a photographer, but I have to disagree.

No two people have the same view of the world, so no two photographs are going to be the same. Anyone can make art. I believe photography being accessible to all is one of the greatest things to come from social media. If you feel confident enough to express yourself by taking photos, I think that’s bloody rad.

I grew up in a small town in Washington state where there are a lot of small businesses. Their signage, for the most part, are still in their original state or are recreated to give a nostalgic feel. I loved driving around town to look at the colors and typefaces. I went to college with the intentions of majoring in sports medicine, but that changed after I took a course on the fundamentals of digital art. I fell in love with creating. Everyday after that quarter I was on my laptop making some awful art, at the time I thought it was great, but it was good practice. I eventually combined my love for music and design together and started making alternate covers, and original covers for friends. 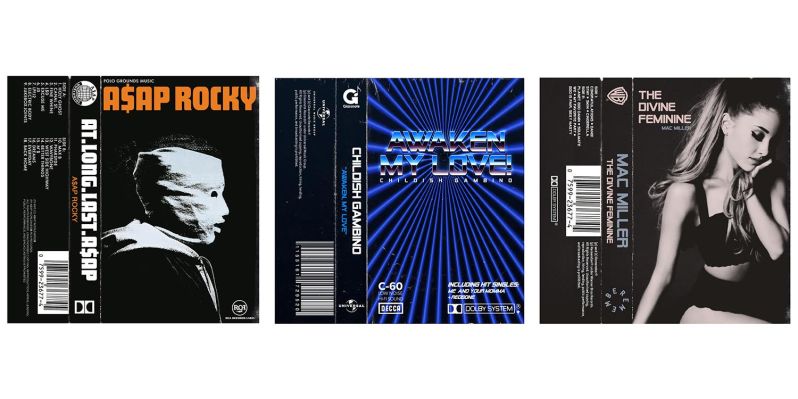 In my latest work, I wanted to combine my love for vintage typefaces, colors, and design with some of my favorite recent albums. I thought it would be fun to change things up and recreate them as cassette tapes, so I went online and to the local goodwill for inspiration. I’m proud with how they turned out, and the time that went into each one. In the near future I’m looking to print them out and place them in actual cassette tape cases.

Art has always been a main factor in my world, I grew up in a very art based town surrounded by many artistic individuals and elements. I’ve always found a sense of serenity when creating and producing forms of art. It’s been a way to not only express myself but help with internal struggles. I don’t remember a specific point in time that I picked up a pencil or paintbrush but I strongly remember relying on art when I was In a deep sate of emotional pain. Although it didn’t make my problems go away or fix anything it gave me a small escape from the real world and helped me understand who I was and what I was feeling.

Add me on snapchat @geenagemmell